Royal University for Women (RUW) held at its Campus in West Riffa, a farewell ceremony for the

Ambassador of Italy to the Kingdom of Bahrain H.E Mr. Domenico Bellato, on the occasion of the end of

his term as an Ambassador to the Kingdom of Bahrain. The ceremony was attended by member of

RUW’s Board of Trustees and ExCo Chairman Mr. Essa Najibi as well as the Acting President of 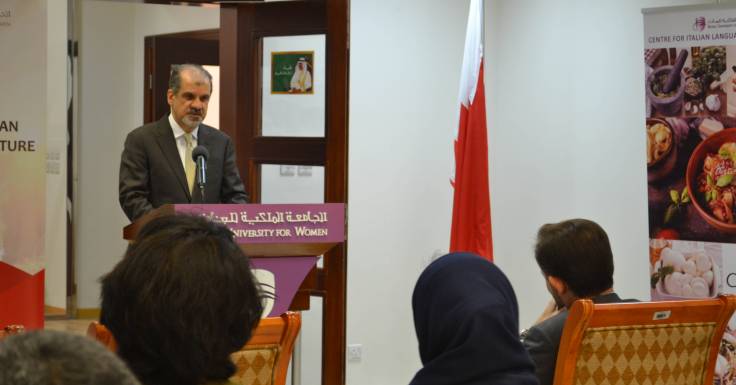 During the ceremony, Chairman of the Executive Committee Mr. Essa Najibi and Acting President of

field of higher education. During his tenure, a Memorandum of Understanding between RUW as a

leading educational institution and the Embassy of Italy was signed, leading to the opening of the Centre

for Italian Language and Culture, the first of its kind in the region. RUW is now the only university in

H.E Mr. Domenico Bellato expressed his appreciation to the Royal University for Women for their

and the university. He also wished the Kingdom of Bahrain further progress and prosperity.

At the end of the ceremony, Dr David Stewart and BOT member Mr. Essa Najibi presented the

Ambassador with a gift, wishing him further success in his future work.